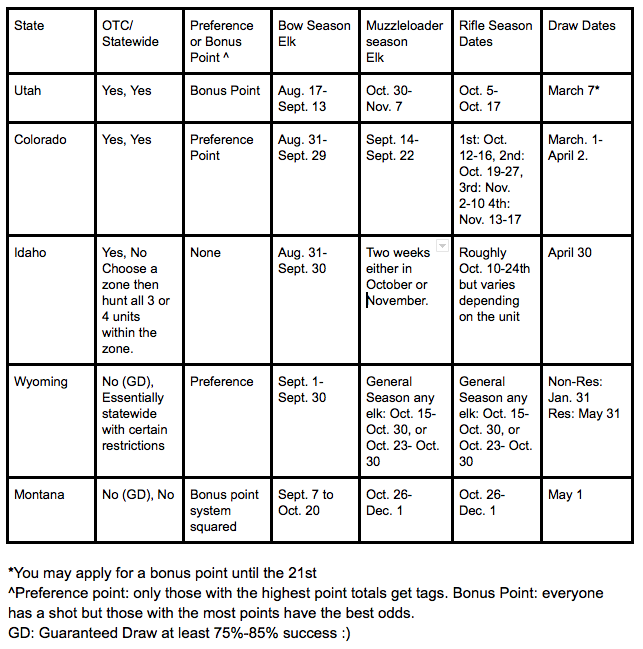 I have shot bulls in Colorado the last couple years with my bow. I may hunt Utah or Idaho this year and hopefully Montana within the next few years. Just for kicks I read some articles on Wyoming archery elk hunting as well. I made a chart describing what I consider to be the top factors to consider when hunting as well as draw dates and rifle seasons.

I considered columns for success rates and hunter density, but it was turning into a bit of a rabbit hole. As far as success rates, you can find solid success rates in any state. I have written past blogs about what to consider when selecting a unit, and I will describe my own system in a future post. Here are the key takeaways from each state.

Colorado has a ton of elk, the largest herd in the country. However, a lot of hunters live in Colorado and the state draws hordes of non-residents. Last season was especially bad as fires closed off some units and hunter density spiked. The OTC tag allows hunting in every general unit (there are other units that are limited entry). That allows a lot of flexibility and less pressure when deciding where to start. Keep in mind Colorado has a muzzleloader season around the 13-20th of September. Muzzleloader hunters add to the crowded feel, which can be really frustrating.

The Idaho OTC general tag (Elk A Tag) permits you to select a zone and hunt any of the units within that zone, typically 3 to 4 units per zone. Certain zones, often near Boise, sell out quickly while others will not, so talk to a local officer about what to expect. It’s easy to research zone on the Idaho Hunt Planner to find units with low hunter density and consistently high success rates. Many units have high success rates (above 18%).

A lot has been said about wolves in Idaho, and they have had a negative effect on elk population. But, year to year weather patterns have much a bigger impact on numbers than predators. The winter of 2016 was especially harsh and the following fall was very hot. As a result, 2017 statistics were low. Success rates rebounded a bit in 2018, and a mild winter thus far should lead to good hunting this fall. Another perk of Idaho is that it allows hunters to substitute a black bear or mountain lion to fill their tag, so I got that going for me.

Utah has a similar set up to Colorado in that you can hunt all of the OTC units on the same tag. The tags also don’t sell out for archery and can be bought over the counter. However, there are fewer OTC units in Utah than Colorado, and success rates tend to be lower than Idaho. Additionally, units near the Salt Lake City area draw a lot of hunters. Lastly, the season runs from Aug. 17 to Sept. 13, which makes it the worst in the west. Elk rut later at higher latitudes, but I can’t imagine it makes much difference. Watch out for statistics from only 2017, some units have about 20 hunters, so a couple lucky guys can make a big difference in percentages. I’ve talked to residents that bitch about not being able to draw tags, but other locals love to hunt Utah and have a lot of success. Utah has big bulls and the opportunity is there for the taking.

Randy Newberg calls Montana the best OTC tag in the country. Though you have to enter the draw in the spring (May 1), many units have very draw odds (75-80%). The general tag is more similar to Colorado and Utah than Idaho in that it will allow you to hunt most general units across the state, with a few exceptions. The season is really long (Sept. 7-Oct. 20), which means you could potentially hunt this season after Colorado or Idaho have ended. Lastly, a lot of Montana’s public land lies at higher elevations, where the elk will be in September. As the fall progresses they move lower, onto more privately held lands. This makes Montana a great option for a future hunt when you have some time to plan and scout, something I plan to do in the next few years.

You can hunt essentially statewide on the general tag. Similar to Montana you must apply but there are good draw odds. Wyoming has confusing rules such as unit boundaries varying depending on species, and if you want to hunt a wilderness area, all non-residents must hire a guide. The Wyoming Game and Fish has always been super helpful when I have been disoriented and called in.  One cool thing about Wyoming is that it allows hunters that are not successful during archery season to come back and hunt the rifle season on the same tag. When you are spending over $500 on a tag that can give you a bit of a safety net. I hope this information helps you make sense of the options.

Thank you for reading,

Here is some drone footage from goat hunting in New Zealand. We have a full length video on our website of both goat and sika.
Early instagramers (about 1000 years ago) had to post their hunting stories by chiseling them in stone. This petroglyph depicts hunting Bighorn sheep in November or December when the rams, ewes, and lambs are all together. Pretty cool stuff. Tag the buddy who would be shooting the small one like the hunter in the bottom right. #utah #iowaslam #hunteverything
Pretty bird pretty bird
Stuart's 2019 bull
Max uses Jepto for deer and goat hunting. The most recent blog describes this style of hunting. #newzealand #hunting #iowaslam
How many sheds did we find? How many wins did the state of Iowa get in the tournament? #goodbyemarch